As evidence that I actually am knitting again and not just catching up on documenting old FOs, a quick (and admittedly not great) shot of two WIPs: 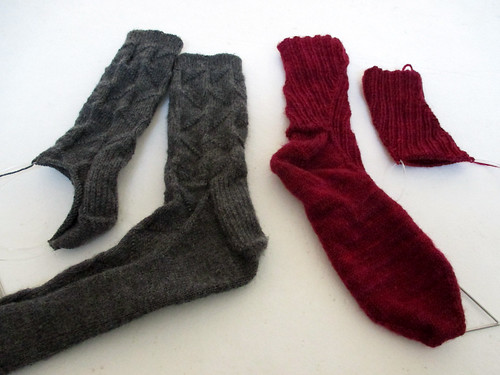 Cauchy is on the left; I’m making these for T with Cascade Heritage Sock. In my opinion it’s perhaps not the best yarn-to-pattern match in the world, as the pattern is a bit subtle thanks to the heathering. But T is actually digging it so far and that’s the most important part. He picked out the pattern, which I’ve modified for a larger circumference. The pattern isn’t very stretchy, so he can’t pull the sock on over his heel if I knit the sock as written. (I had to frog and reknit the leg on the first sock twice before I figured out the right stitch count for him.)

Slide, on the right, is for me. It’s in Mountain Colors Bearfoot, which I have used before (for Snicket), and it makes a lovely toasty house sock. Too thick for most of my shoes, but perfect for indoor lounging (and it even stands up nicely to our carpet, which, as I’ve mentioned before, is awful for socks).

I’m hoping I get at least Cauchy done before the end of this month, partly so that it’ll be done before his birthday and partly because I’m about to start two time-sensitive projects that will take up all my April and May knitting time. Should be doable. Probably.