Knitting-wise, not a ton happened until the end of last year, partly because my wrists were an issue and partly because I just didn’t feel like knitting for awhile. Life-wise, well. We all know what’s been going on in the world, right? At least, I certainly hope we do, because I’d really rather not get into it much on this specific platform.

I’ve decided to revive my blog, mainly because I’d like to start documenting my knitting again. Fortunately, I never relied solely on Ravelry, so at least I don’t have to fully rebuild project pages here or anything. As far as my WIPs and FOs go, I can just start posting them here, without the “cross post to Ravelry” step that used to be part of my process.

I do have a significant amount of blog reworking to do, though, since web design’s changed a lot in the past four years and my layout was a bit outdated even in 2016. So in the coming weeks, in addition to catching up on FOs, I’ll also be working on updating the layout, adding alt tags to images, and other site maintenance. I’ll also be removing all Ravelry links, due to how they are (not) handling accessibility.

That’s all for now. More to come! 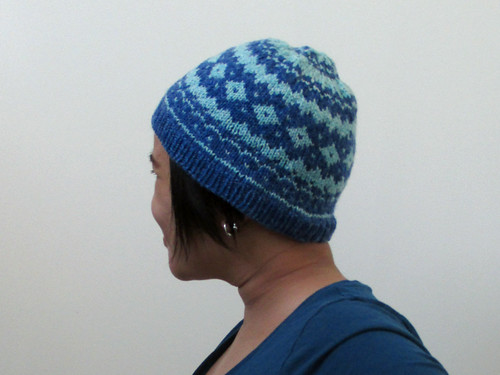 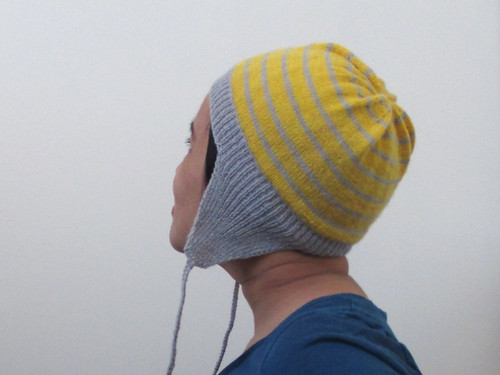 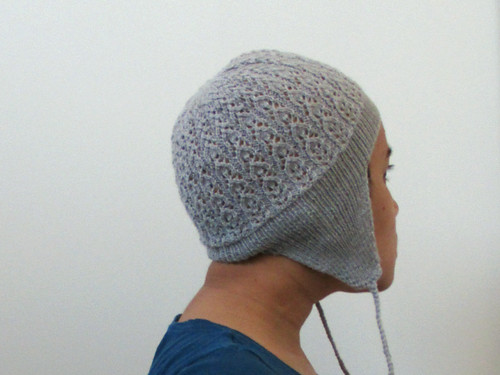 Oh look! More from the backlog! 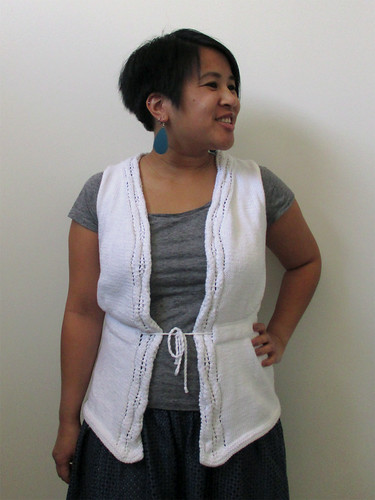 The original pattern is for a short-sleeved cardigan, but I made a vest instead – I just edged the armholes with i-cord. I probably should have made the armholes just a little deeper to account for this, though, because after adding the i-cord the armholes are a smidge short. It’s still wearable, but it’s something I need to keep in mind for the next time I want to make a vest. 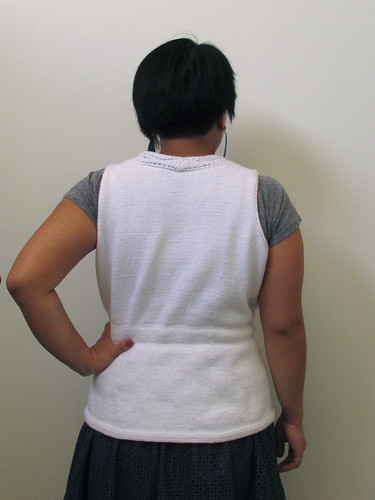 I also decided to eliminate the lacy bits in the lower back.

Of course, I modified the shaping for my own body, but I did actually keep the positive ease, for once. Though I may have overcorrected a bit and put in a little too much ease. Oops! 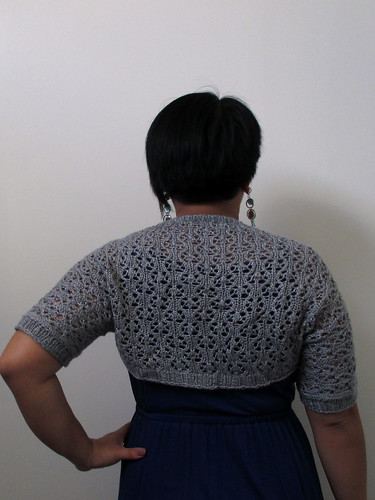 No pattern for this little shrug – it’s just your basic seamed rectangle construction. I used the “fleurette” stitch pattern from the first Barbara Walker treasury. 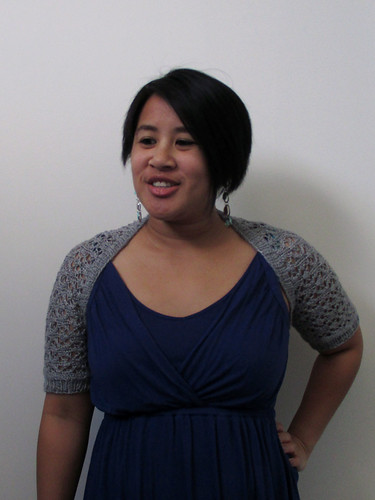 I didn’t love actually knitting with the yarn, but the finished product is pretty much exactly what I was aiming for, so it all worked out in the end!

Someday I’ll catch up and have both my blog and Ravelry project page up-to-date again, right? Right?

There is so much going on in the world that I am still struggling to process. I’m mostly keeping that to other spaces rather than on this blog – but I guess I just want you all to know that I am here, I am aware, and I am listening. And calling out bullshit when needed.

In the meantime, virtual hugs to anyone who needs them.

Tools of the trade

In my opinion, ready-made notions kits are great in theory, but not so great in practice. But this may be more of a reflection of me and my specific tastes/needs than it is on the kits themselves. 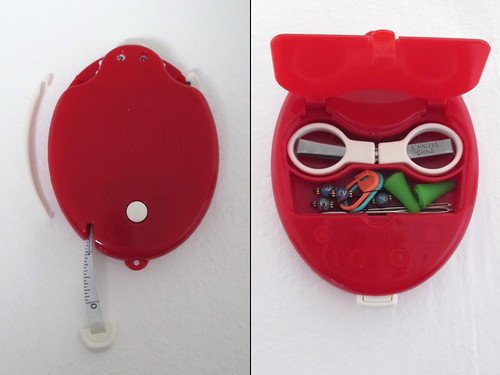 A few years back I got a Knit Kit from the in-laws as part of my Christmas gift. Mine came with a thread cutter, stitch counter, double-ended crochet hook, folding scissors, point protectors, stitch markers, darning needle, and tape measure. (The thread cutter is no longer included in the current version, which is just as well, because mine never cut worth a damn anyway.) The stitch counter is also a dud on mine – the 10s digit doesn’t increment, but since I don’t use mechanical counters anyway it doesn’t really matter to me.

As you can see, I replaced the stitch markers, point protectors, and darning needle. The former was just due to personal preference – I originally subbed in some smaller soft ring stitch markers, but I’ve since replaced them with some snag-free markers T’s aunt gave me, along with a couple of locking markers. The latter two were due to size – the stock point protectors fell right off most of my frequently-used needle sizes, and I needed more variety with needle sizes (I have an entire Clover set in there, and almost never use the largest one).

I liked the convenience of having everything all in one package, and none of the TSA agents I encountered while traveling ever took an issue with the thread cutter or scissors. One of my biggest problems with this kit, though, is that not all components are easily replaceable. When the tape measure inevitably stretched out, this just became an overly bulky carrying case.

I mean, it’s not a bad first notions kit. It’s just not a great one, and it doesn’t hold up over time. 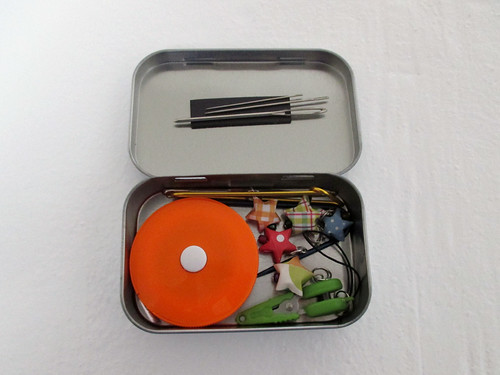 I also own a standard Knitter’s Tool Tin, which was my prize from last year’s Puck This! Stanley Cup pool. As pictured above, this came with a tape measure, tiny yarn snips, stitch holder, double-ended crochet hook, cable needle, a set of three needles, and five stitch markers.

The tin, not surprisingly, is more durable than the plastic Knit Kit casing, and it’s more compact, which is a nod in its favor. Also, you can replace everything inside it, which is great for longer-term use. So if I had to pick a pre-made notions kit for a newer knitter, or for an experienced knitter I didn’t know well, this would absolutely be my choice.

However, the thing is, notions kits aren’t totally one-knitter-fits-all. So once you have a good idea of what you like to knit, or what tools work best for you, you may find yourself replacing parts of your existing kit… like I did with the Knitter’s Tool Tin.

I replaced the yarn snips with collapsible scissors very quickly. The snips I got don’t cut very well. It’s possible I got a dud, and I probably could have gotten a replacement, but… I also just found them uncomfortable to use so there was no point for me personally.

Also, the default stitch markers are very cute but not ideal for me. The rings are a little thicker than I like, and I find that the stars tend to get in my way as I knit (granted, this last bit may be knitter error). But the bigger problem for me is that the rings aren’t snag-free. So I’ve replaced these with a couple of locking stitch markers and several snag-free markers.

I also replaced the needles, because two of the three aren’t what I need in a notions kit. For example, I need a small darning needle, not a small sewing needle. 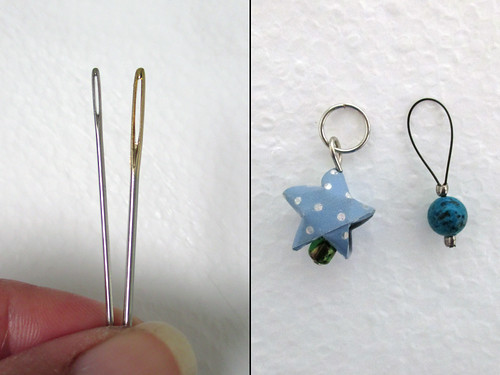 In both cases, the original Knitter’s Tool Tin component is on the left, while my component of choice is on the right.

I also took out the cable needle since I knit cables without one. And, I’m considering removing the stitch holder; there’s nothing wrong with it, I just don’t use holders much. On the flip side I added a couple of things. I threw in a small bobbin of fine crochet cotton for lifelines, provisional cast ons, and so forth. I also added a pair of point protectors, though they actually spend far more time out of the tin in use. 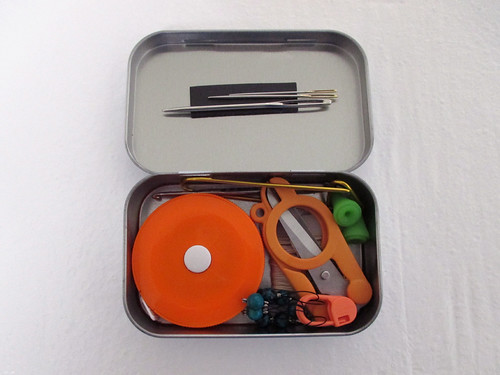 Ah, better. Much more suited to my needs.